The Nightfall team contributed this plugin and it is now available in Fluent Bit >= 1.9.1.

Sensitive data often makes its way into logs. Though most of the time unintentional, these incidents have the potential to do a lot of damage, as they usually involve exposure of API keys, passwords, and customer data that can give attackers access to critical business data or put companies at compliance risk. This is why it’s important for organizations to be proactive about securing their logs. Because identifying sensitive data is not an easy task, Nightfall built a plugin for Fluent Bit. In this tutorial, we will go over how to set up Fluent Bit and the Nightfall plugin to process, forward, and secure your logs.

If you do not have a Nightfall account, you can sign up for free here. Once you have an account, navigate to Detection Engine > Detection Rules where you can create a detection rule with which you can secure your logs. Nightfall defines a detection rule as an aggregation of detectors: for example, {“credit card number” or “social security number”}.

Under the API Keys tab, create an API key, which you will need to run the Nightfall plugin. Under the Policies tab, create a policy with the detection rule(s) you created above. You can also configure where alerts from Nightfall about findings in your logs should be sent, featuring integrations like email, Slack, and HTTP Webhook events.

The Nightfall plugin is available in Fluent Bit versions after 1.9.1, so you can pull directly from the fluent bit repository:

To keep our data pipeline configuration (inputs, parser, filters, outputs) tidy, we will utilize a Fluent Bit configuration file to save our configurations. Note that this file contains secrets in it and should be kept secure. Here is an example configuration file with the Nightfall filter plugin enabled, HTTP and TCP ports as the input sources, and stdout as the output destination.

Here is more information on each configurable parameter in the Nightfall filter plugin:

Now we can start up Fluent Bit with the Nightfall plugin by mounting the configuration file with:

Now we can feed Fluent Bit some data using HTTP and netcat:

Here is the output after running these commands, with all the sensitive portions redacted by the Nightfall plugin. Note that only input sources with tags starting with important_ were scanned. Also note that tags for HTTP inputs can only be set by adding it to the path of the request URL.

On top of redacting the sensitive portions of the logs, Nightfall also allows you to forward alerts to destinations configured in your policy, including email, Slack, and HTTP webhooks, so you can identify exactly what was leaked in your logs. Here are the Slack alerts after running the commands above: 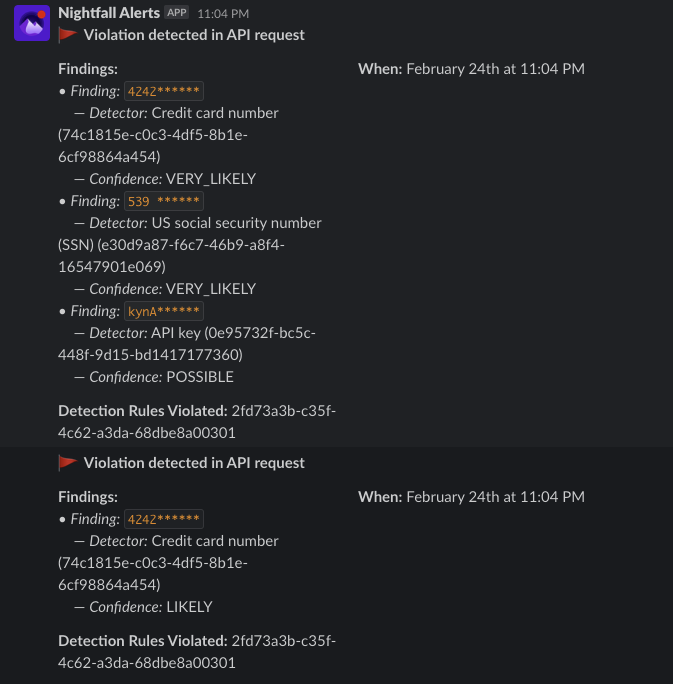 In this example, we only used rudimentary inputs and outputs like curl, netcat, and stdout. You can extend Fluent Bit by connecting it to any logging platform supported by Fluent Bit, and with Nightfall’s filter plugin you can be assured that those platforms are secured.